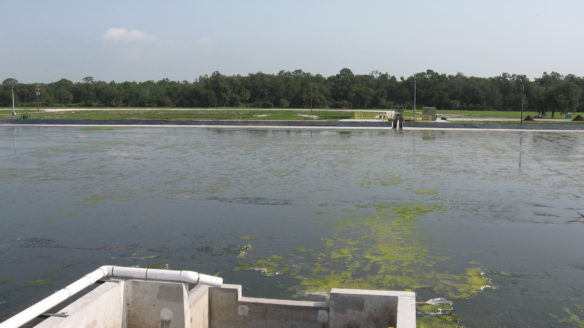 In 2005 the South Florida Water Management District (SFWMD) contracted with HydroMentia for construction of a 15 MGD Algal Turf Scrubber® (ATS™) on Taylor Creek following the successful multi-year operation of an ATS™ system in an adjoining watershed with similar land use. The facility opened on January 22, 2007. Dr. Walter Adey of the Smithsonian Institution, the inventor of the Algal Turf Scrubber®, commented at the Grand Opening ceremony that the algae in the system was unlike the algae he observed at numerous other early-stage ATS™ systems. Soon after the system experienced periodic algal die offs and never achieved the potential predicted by HydroMentia’s models.

“We were surprised at first, but then we realized the Algal Turf Scrubber® was simply responding to its environment,” says Mark Zivojnovich, Vice President of Project Development for HydroMentia. “Periphytic algae acts like a canary in a coal mine, and it was telling us that Taylor Creek had problems that weren’t readily discernible from typical water quality tests.”

The Algal Turf Scrubber® grows native species of periphytic or attached algae in a controlled, engineered environment to recover excess nitrogen, phosphorus and other contaminants from impaired surface waters. The EPA classifies periphytic algae as an indicator species of environmental health because they respond rapidly to human disturbances including contamination by excess nutrients, metals, herbicides, and hydrocarbons. If periphytic algae does not thrive under normal conditions, further investigation into the health of that water body is recommended.

To test the theory that algal growth was being impacted by toxic constituents within Taylor Creek, HydroMentia conducted a series of chronic toxicity bioassays with AQUA-Science in Davis, California, one of the nation’s leading analytical laboratories specializing in water toxicity testing. These tests showed that there was a constituent(s) in the water inhibiting algal growth, but the lab couldn’t identify what chemical or compounds were responsible within the budget provided.

HydroMentia reported its findings to the SFWMD and the FDEP, and the two agencies collaborated on a study that resulted in the Algal Growth Inhibition Report for the Taylor Creek Water- shed that can be found here.

“We appreciate all the hard work FDEP and the South Florida Water Management District put into this report,” Zivojnovich said. “Algal inhibition was found in 91% of the valid tests, confirming the presence of unknown constituents affecting the growth of algae. While this is the only ATS™ system in the U.S. that has ever experienced toxicity impacts, it clearly demonstrates that the ATS™ is not just a superior nutrient removal technology, but it also functions as a continuous monitoring system for the health of a water body. A monitoring system that most water quality tests simply don’t provide.”