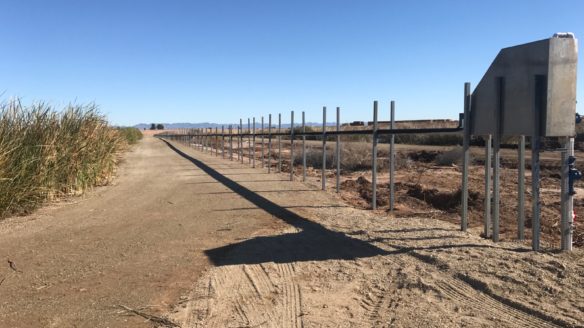 Salton Sea, California (January 30, 2017) – HydroMentia has completed installation of an 890’ long Algal Turf Scrubber® Pilot for Sandia National Laboratories. The pilot ATS™ facility is located at the Shank Wetlands which is owned and operated by the Imperial Irrigation District. Water from the Alamo River feeds the Shank Wetlands and ultimately discharges to the Salton Sea.

Sandia National Laboratories with technical support from HydroMentia will investigate if the ATS™ technology could solve part of the Salton Sea problem by reducing pollutants from the rivers (nitrogen, phosphorus, and selenium), while at the same time providing biomass that can be used for the production of renewable energy, fertilizer and specialty chemicals.

The challenge however is significant. Fed largely by agricultural runoff from the Imperial Valley, the sea is a natural basin that sits 228 feet below sea level and concentrates all the salts, nutrients, and contaminants it receives.  Salinity is already 50% higher than the ocean and is rising due to evaporation loss that exceeds the freshwater inflow. Excess nutrients promote and exacerbate algal blooms that produce massive fish and bird kills (Sandia National Laboratories, 2017) .